Posted by Paradoctor at 9:10 AM No comments:

Posted by Paradoctor at 9:11 AM No comments:

Posted by Paradoctor at 9:28 AM No comments:

Posted by Paradoctor at 10:53 AM No comments:

The Passion of the Santa


The Passion of the Santa

Late one night, in the middle of a dream, Sogwa the supercat was window-shopping in Nowheresville Mall. There were hordes of shoppers, but none seemed to notice that Sogwa was there too. She walked amongst them, unseen.
All the prices were very low, but that did Sogwa no good at all. Sogwa the supercat wore no clothes, of course, so of course she carried no money at all, not a cent. It didn’t matter that all that cool stuff was marked down from a thousand dollars each to a penny each; she couldn’t afford it either way.
Somehow the floor was harder than ordinary marble; it made Sogwa’s feet ache. She sat on a bench near a fountain. Shoppers swarmed by, not seeing her.
Right next to the bench was a short pedestal. Someone had left a Santa doll on it. The Santa doll’s arms and legs splayed like a starfish; his smile was stitched on a linen face as round as a full moon. Sogwa reached for it.

The moment she touched the Santa doll, it flew upwards with a shimmering sound, shedding sparks and streamers of light. The doll rose into the air, turning and growing.
Full-grown, Santa rotated in midair. He boomed, “HO, HO, HO! Have a merry Christmas! A healthy Hanukkah! A quality Kwanzaa! A soulful Solstice! AND A HAPPY NEW YEAR!” Santa waved his right hand, and candy rained from the ceiling.
Sogwa yowled, “YOW!”
Santa looked at her, winked, and put a finger beside his nose. There was a flash of light.
When Sogwa’s eyes cleared, she saw that she was sitting on Santa’s lap, and Santa was on a kind of a throne. He said, “What’s your name, kitten?”
“I’m Sogwa the supercat, and I think your special effects are really neat, Santa!”
“So Sogwa, you like magic?” She nodded, and he said, “Then here, have a magic wand!” Santa handed her a short stick.
She looked it over. “What’s it made of?”
“Genuine cheap plastic, ho ho ho!”
“Thank you, Santa! But how does it work?”
“It works well enough.”
“I mean... how does it work? What’s the secret?”
Santa said, “It’s magic!”
Sogwa said, “Yes, I know it’s magic, but how does magic work? Tell me the truth!”
Santa’s face fell. “You want... the truth?”
Sogwa said, “Yes, that’s just it! How do you do it, Santa? I mean, really and for true? ’Cause I’d like to do it too!”
Santa slowly stood up; Sogwa leapt off his lap and turned to face him.

Santa said, “Are you sure you want the truth?”
Sogwa said, “Yes, I’m sure!”
“Even if truth isn’t what you’d like it to be?”
“Especially if! Tell me, Santa!”
“Even if magic isn’t what it seems to be?”
“Even if it isn’t there at all!”
Santa said, “I will tell you the truth, but only if you insist; for the truth will set you free - but first it will drive you crazy.”
“I insist! Tell me, Santa! Do you exist, or not?”
Santa heaved a huge sigh.
He said, “No, Sogwa. I do not exist.”

Santa said, “You may watch the fireplace all night, but I will not come. You may wire a reindeer alarm on the roof, but it will not ring. You may seek me at the shopping mall, or the Post Office, or even the North Pole, but you will not find me. There is no flying sled, no magic reindeer, no polar workshop, no elf workers. None of those things exist; nor do I.”
Santa said, “So people pretend to be me, they play at being me, but only so far, and not for real, because I am not for real. I cannot help them; I am not there.”
Santa said, “For there is no Santa Claus! No lunch is free, no machines save labor, no tyrant is benevolent, no motives are pure, and no results are guaranteed. There is no invisible hand of the market, for that hand would be mine. There is no philosopher-king, for he would be me. There is no perfect lover, apart from myself. And I do not exist.”
“And believe me, Sogwa,” Santa said, with tears in his eyes, “I wish I did exist!”
And Santa wept.

Sogwa rushed to his side. She hugged him and patted his shoulder, and Santa said, “I’m sorry, I’m sorry, I’m a fake, a fraud, a funny story, a lie for children, and I’m sorry that’s what I am, because I wish I were real, I wish I could actually help!”
He blew his nose, and there was a flash of light.

When Sogwa’s eyes cleared, she saw that she was back in Nowheresville Mall. Santa was now a tiny baby. The baby Santa was on top of the same pedestal Sogwa found him, and as before crowds of shoppers swarmed by, none noticing him or Sogwa.
The baby Santa cried, “IT’S NOT FAIR! Not for me, not for ANYBODY! I don’t exist, there ain’t no Santy Claus, and IT JUST ISN’T FAIR!” 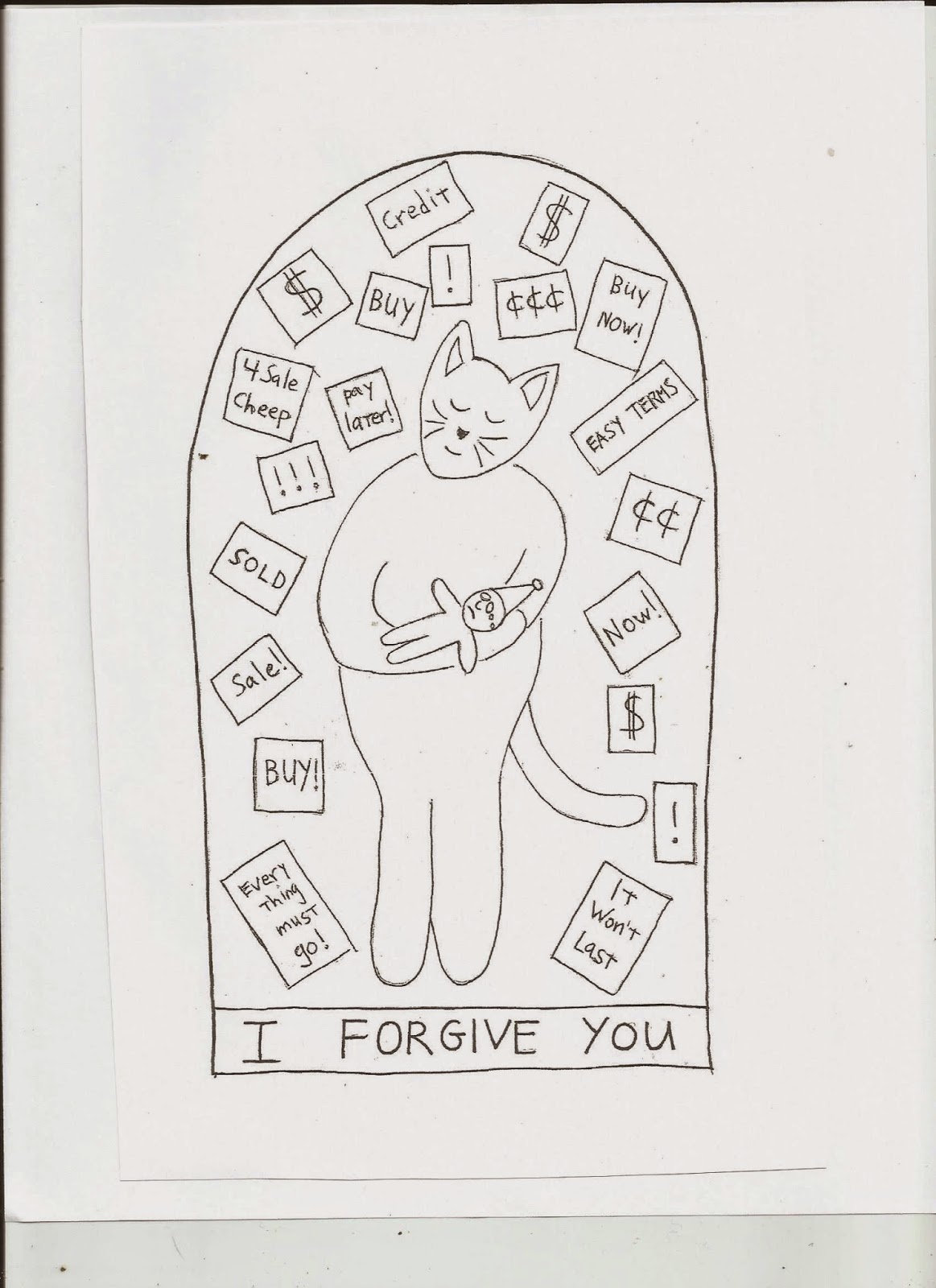 The baby Santa sobbed and wept.
“Hush, dear Santa, I love you and I forgive you. You did give up everything for me. How generous! You never even were - and for what? So I would doubt. So I would question. So I wouldn’t believe just anything, just because it sounds good and somebody said it’s true.”
The baby Santa sniffled.
Sogwa said, “O patron saint of skepticism, may your memory protect me! Whenever a schemer offers me something too good to be true, and I am tempted to believe, may I remember you, and what you turned out to be, and may I not be fooled. By your gift, Santa, may I doubt, may I question, and may I save myself. So thank you, Santa. Thanks for the warning.”
The baby Santa lay quiet.
Sogwa said. “Nobody’s perfect, and you’re nobody, so you’re perfect! I will never forget what you never were. I love you just the way you aren’t.”

Sogwa saw that she was holding a Santa doll. The Santa doll’s arms and legs splayed like a starfish; his smile was stitched on a linen face as round as a full moon.
Sogwa  left the Santa doll on the pedestal for the next kid.

While walking away, Sogwa said to herself,  “Well, at least I got some loot.” She waved the cheap plastic magic wand. “This ought to be worth something.” 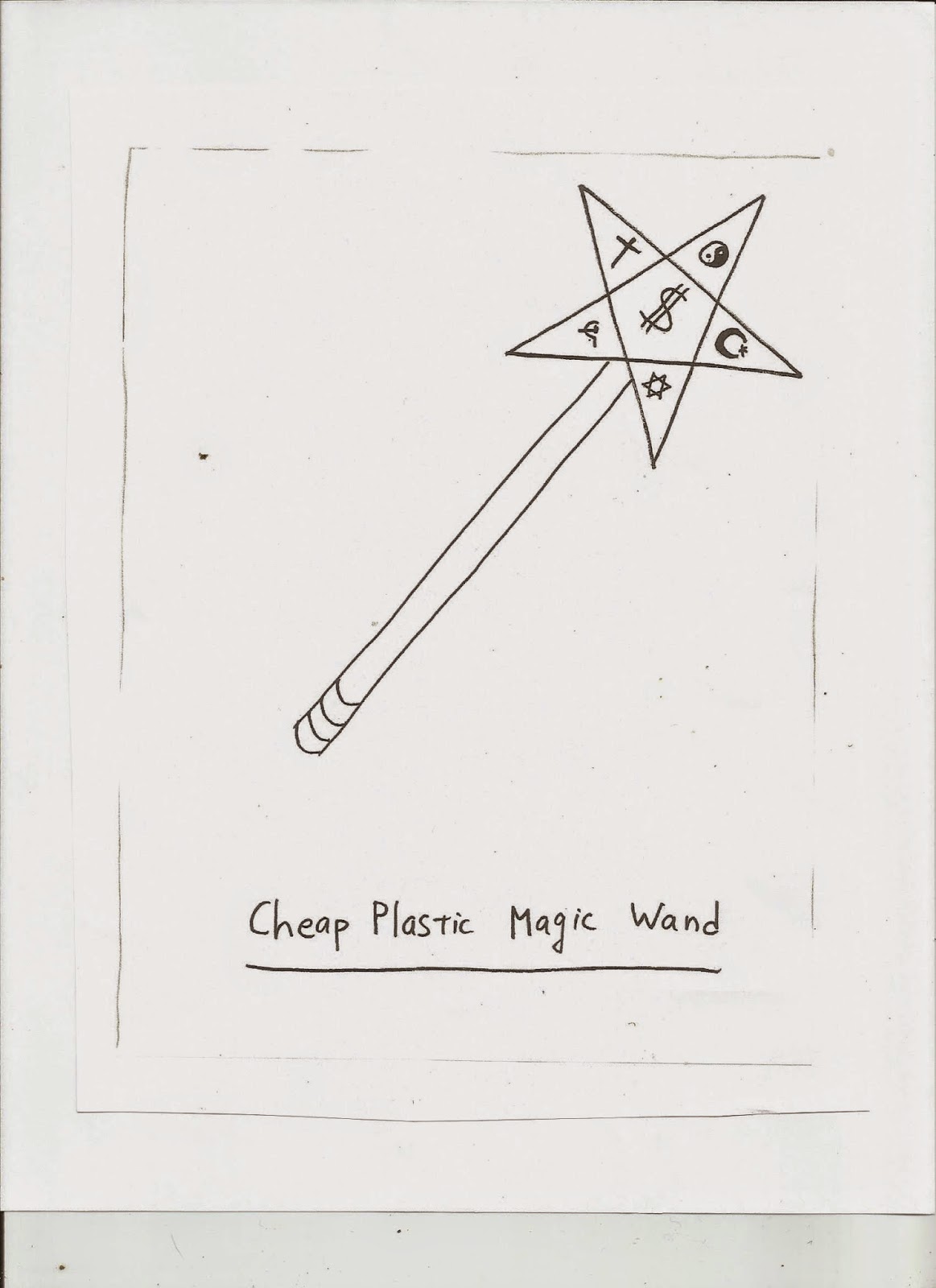 Posted by Paradoctor at 9:39 AM No comments:

On Santa and the Noble Lie


On Santa and the Noble Lie

Plato, in his “Republic”, admits that his ideal Republic must use what he called a “noble lie”. The lie is that there are four kinds of men; of gold, of silver, of brass and of iron. The men of gold are the philosopher-kings, the men of silver are the guardians, and the men of brass are the artisans, and the men of iron are the farmers. The upper classes of Plato’s Republic tell this to the lower classes, to reconcile themselves to their lives; but it is a lie, as Plato admits, for there is only one breed of human, not four.

A deception this crass and self-serving is called noble? And stranger still, Plato thinks it would work? For surely artisans and farmers are wise to the world’s lies. Their livelihood is the market, so they know very well that the buyer must beware! They’ve seen brass called gold, and gold called brass! Plato’s Noble Lie can fool only the naïve and unworldly;  to wit, his Republic’s upper classes. His philosopher-kings fool only themselves.

A lie self-serving when told, intended for permanence, ineffective to its cynical hearers, corrupting to its tellers; what is noble about any of that? I would call a lie noble only if it costs the teller, and it’s built to be temporary, and it improves the minds of the hearers when the deception inevitably fails. A lie is noble if it creates philosophers.

Therefore consider the legend of Santa. It’s a lie, all right; a known falsehood told to the young by their parents, their peers, shopkeepers, radio, TV, the Internet, NORAD… even the President of the United States is in on the conspiracy! Stated baldly like that, it sounds weird; but that’s the plain truth. And the purpose of this elaborate prank? To collapse! Eventually, inevitably, the child discovers that there is no Santa Claus; so you shouldn’t believe just anything you hear! Santa, in the very act of vanishing, leaves behind a lasting gift: sales resistance.

Santa Claus is a failed myth, deliberately told by unbelieving adults to their credulous children as an initiation into skepticism. His liberating revelation is that he does not exist. Santa is to the gods as a vaccine is to disease; a failure coopted into a warning. Santa is a paradoxical saint of a doubt-based culture.

I say this as an outsider to the Santa cult; for I do not participate in the rites of shopping. However, I did initiate my daughter into skepticism via the Tooth Fairy; an equally noble lie.

Posted by Paradoctor at 8:41 AM No comments: